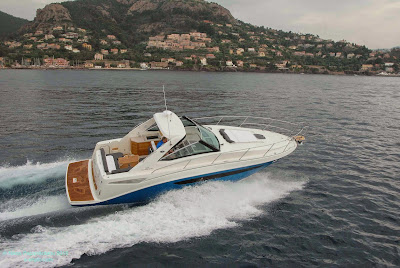 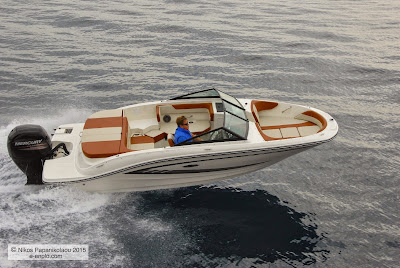 Sea Ray won the Boat Builder Award for the Best Retail Marketing Initiate during a formal ceremony in Amsterdam on November 16. They produced a VR video based on the characteristics and the performance of the new luxurious sport series SLX seen from first person point of view. This video can been seen through VR viewers also produced and distributed by Sea Ray. More info in the following press release. 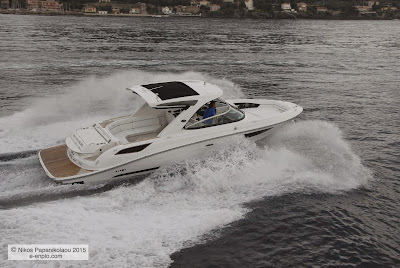 FOR IMMEDIATE RELEASE
SEA RAY®’s SLX EXPERIENCE LAUNCH CAMPAIGN AWARDED
BEST RETAIL MARKETING INITIATIVE
KNOXVILLE, Tenn. (Nov. 22, 2016) — In a ceremony held at Amsterdam’s National Maritime Museum on November 16, Sea Ray earned the first accolades of the night, winning a Boat Builder Award for Best Retail Marketing Initiative. The award was given in recognition of Sea Ray's highly successful SLX series launch, a multi-faceted campaign featuring Virtual Reality (VR) technology.
Like the luxurious SLX sport boats themselves, Sea Ray was determined to produce a launch campaign that was stylish and compelling. It also had to be widely accessible for maximum awareness of the new product. “We sought a way to give boaters an immersive taste of the SLX experience that could be enjoyed anywhere, anytime,” said Sea Ray Director of Marketing, Shelby Kirby. “We found it in virtual reality.”
First, Sea Ray produced a video featuring the SLX 280 (one of 5 new models in the series), shot from three first-person points of view: driving the boat, relaxing in the cockpit, and being towed behind it on a wakeboard. That video was then converted into a fully immersive VR format, which could be enjoyed through a simple cardboard VR viewer paired with a smartphone. A person watching the video through the viewer would experience firsthand many of the boat’s key attributes: premium fit & finish, sleek style, cutting-edge technology and breathtaking performance.
Sea Ray then produced 10,000 SLX-branded VR viewers, formatted for cost-effective shipping and easy assembly. The viewers were available upon request at searay.com, where a dedicated landing page featured a prominent form to register by providing contact info and model of interest. Sea Ray handled the direct fulfillment and sent a follow-up email for every request. This proved to be a wildly successful lead capture opportunity and generated tremendous buzz for the company.
Additionally, two high-end VR headsets were sent directly to every authorized dealership in U.S. and Canada as part of an “SLX Launch Kit,” along with decorative SLX showroom materials, to further leverage the video and the technology.
“The judges considered this to be an amazingly innovative idea, which proved compelling for its target audience,” said Glenn Zelen, International Marketing & Regional Sales Manager for Sea Ray’s EMEA Division. “They felt that the ingenuity and bold scale of the investment helped to transmit Sea Ray’s marketing message clearly and effectively. Such innovation could well become an important marketing technique for all boat dealers in the future.”
Sea Ray was among just eight winners and seven honorable mentions awarded in this year’s Boat Builder Awards for Business Achievement. More than 280 guests attended the gala dinner under the glittering dome of the museum’s central courtyard to hear the winners announced.
“It was a spectacular evening and an honor to be recognized in such esteemed company,” said Zelen. “Sea Ray is committed to pushing the envelope in all ways, from the design and manufacture of our boats to the marketing efforts that promote them.”
Now in its second year, the Boat Builder Awards for Business Achievement are organized jointly by METSTRADE, the world’s leading platform for professionals in the leisure marine equipment industry. METSTRADE is the world’s largest trade exhibition of equipment, materials and systems for the international leisure marine industry. It is organized by Amsterdam RAI in association with ICOMIA (International Council of Marine Industry Associations).
To see the awards ceremony in pictures, visit boatbuilderawards.com. For more information and to view the Sea Ray line-up, please visit searay.com.
# # #
ABOUT SEA RAY
Founded in 1959, Sea Ray is the world’s leading manufacturer of superior quality pleasure boats. Sea Ray is headquartered in Knoxville, Tenn., and operates as part of the Boat Group division of Brunswick Corporation. With more than 40 models ranging from 19 to 65 feet, Sea Ray makes a boat for every lifestyle—each built with a unique commitment to quality, craftsmanship and excellence throughout. Additional information about Sea Ray is available at www.searay.com.
ABOUT BRUNSWICK
Headquartered in Lake Forest, Ill., Brunswick Corporation’s  leading consumer brands include Mercury and Mariner outboard engines; Mercury MerCruiser sterndrives and inboard engines; MotorGuide trolling motors; Attwood, Garelick and Whale marine parts and accessories; Land 'N' Sea, Kellogg Marine and BLA parts and accessories distributors; Bayliner, Boston Whaler, Brunswick Commercial and Government Products, Crestliner, Cypress Cay, Harris, Lowe, Lund, Meridian, Princecraft, Quicksilver, Rayglass, Sea Ray, Thunder Jet and Uttern; Life Fitness, Hammer Strength, Cybex, Indoor Cycling Group  and SCIFIT fitness equipment; InMovement products and services for productive well-being; and Brunswick billiards tables, accessories and game room furniture. For more information, visit http://www2.searay.com/e/47872/2016-11-22/4hq989/216295444

Email ThisBlogThis!Share to TwitterShare to FacebookShare to Pinterest
Posted by Nikos Papanikolaou at 12:19 PM